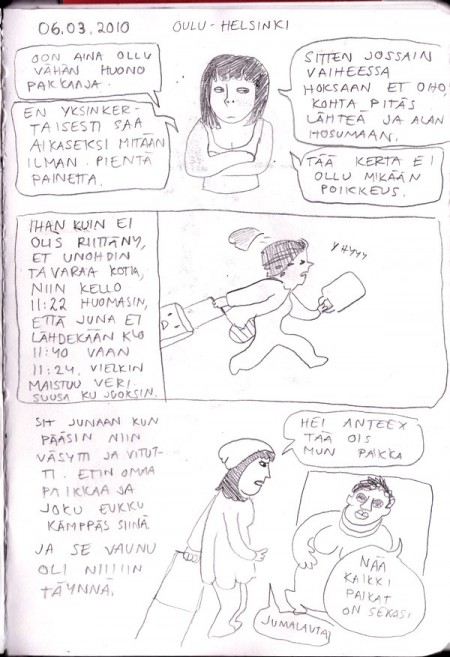 I’ve always been bad when it comes to packing / I just cannot get anything done without some kind of pressure / then suddenly I notice I should already be running and I start rushing / This time wasn’t an exception /As if it wasn’t enough,  at 11:22 I noticed my train was leaving at 11:24 instead of 11:40. I can still taste the blood in my mouth / I got into the train and was exhausted and annoyed as hell. I was looking for my seat just to find out there was some old woman sitting in my seat. And the wagon was so full . / (Hey excuse me this is my seat) / (They’re all mixed) / (Goddamnit) 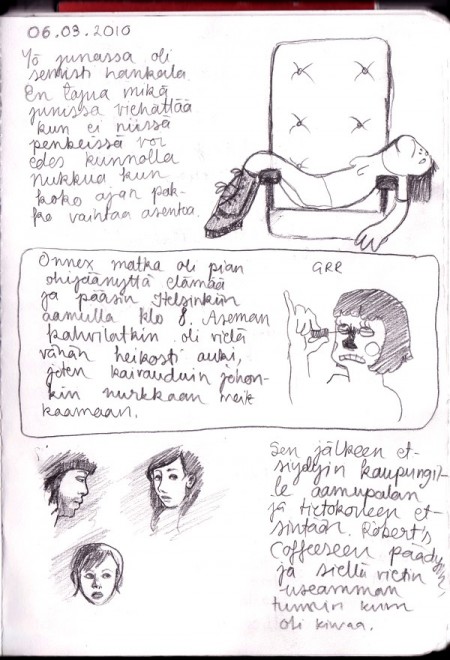 The night in the train was quite tough. I don’t understand what is that attracts me about the trains especially when you can’t even sleep in there. Needed to change the position all the time. Happily the trip was soon over and I was in Helsinki at eight AM. Almost every café in the train station were still closed so I just spent some time putting the make up on. After that I started looking for a place to have a breakfast in (and go online). I found Robert’s Coffee and spent several hours there. 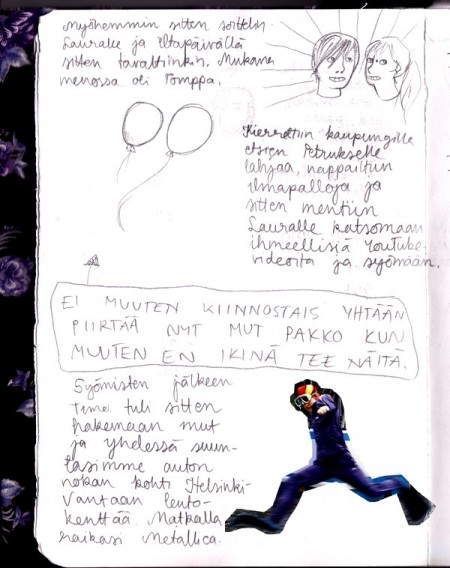 Later I started calling Laura and in the afternoon we met. (Feat. Tomppa) We strolled around the city, looking for a gift for Petrus and catching balloons. After that we left for Laura’s place to eat and watch awesome youtube videos. At nine Timo came to pick me up and gave me a ride to Helsinki-Vantaa Airport. We listened to Metallica. At the airport everything went quite smoothly-in the very beginning. I started layering myself with many many clothes (so ugly) just to have the suitcase closed / I’m so glad I’m such a fashionista and everything looks so awesome on me :P / My layers didn’t help much as I still needed to pay extra for all the stuff I had with me / Then in the end I almost cried and ran to catch the flight because  I was so scarde for my camera and perfume (they were in the bag I needed to leave with the stewardesses. Then we just went around the airport with a bus because the plane was broken Finally wer got into the plane but of course we needed to sit right next to the emergency exit / at least there weas soemthing nice / we talked a lot with the girls and the flight was soon over. It was ten PM when we got out of the plane / I went to get my suitcase and Pixie was already there / We didn’t have much time to talk because needed to ran to catch the metro. Even if it didn’t help much as the last one left earlier / But we were quite lucky, found a finnish couple who were willing to share a taxi with us / The man looked like an elf or soemthing!